Callie (TD2) Tries Steps For The First Time
At barely 10 weeks old our new Maltese puppy, Callie, is only 4 inches tall and nowhere near ready for human steps or even regular "dog steps". She gives Good Steps a try for the first time and nails it! She now has official Test Dog status as well as a great way to get up to the couch.

Chloe (TD1) Demonstrates Good Steps (in editing)
Chief Test Dog Chloe shows off her stuff by demonstrating Good Steps for the camera. Yup, she is a Maltese.

Fiona (TD3) Nails Her Good Steps Audition
Fiona, a 2 yr old Corgi, shows her stuff by easily mastering Good Steps on the first try. By doing so she has shown she will be a lot less likely to suffer back and joint issues as she gets older. Congrats, TD3!

Bear (TD4) Explores Steps For First Time
Bear, an 11 yr old Labradoodle, tries out Good Steps, and dog steps, for the first time. He is too large for regular dog steps so this is all new to him. He quickly discovers that going up is easier than coming down. Unfortunately, Bear has some built-in step anxiety so we will be back with some even larger steps for him next time.

Polar Bear (TD5) Finds Help for Hip Dysplasia
Polar Bear, or "Po Po", is a 13 year old Westie with some rear end nerve damage and increasing hip dysplasia as a result of tangling with a moose during his more rowdy days. Yup. You heard right.

He has been having more and more difficulties getting up to his favorite spot on the couch and regular dog steps were just not made for a fellow of his stature. We thought it was a great opportunity to see if Good Steps could help. Within the 3 minutes it took to shoot his audition video Po Po mastered the steps like they were nothing. Welcome aboard, Test Dog 5! 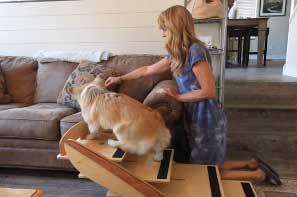 Suki (TD6) Explores Good Steps ...and Likes Them
Suki is a one year old Corgi who is happy and healthy in every way, and her human hopes to keep it that way. Corgis, being prone to hip and back issues, are great candidates for Good Steps and Suki showed us during her test that she fits right in with that. 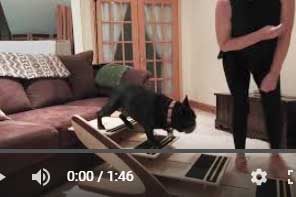 Trevor (TD7) Gives Good Steps a Perfect Score
Trevor is an 11-year-old French Bulldog who is beginning to have some hip issues. This breed is known to develop hip and shoulder problems especially if they have a history of jumping up or down from couches and beds. We configured the Good Steps to give him plenty of room and let him show us what he could do. No problem!

Laszlo (TD8) Finds Dog Steps for His High Bed
Laszlo is a 3 year old Chihuahua & Australian Shepherd mix who puts Good Steps adjustable dog steps to the High-Bed test and finds they work as promised. Laszlo also tests a number of configurations during the test so this is an excellent video for those wishing to see how these amazing dog steps really perform.

Proudly made in the U.S.A.